Scarpa to present 'Ordinary and Extraordinary' in next APDesign Ekdahl Lecture 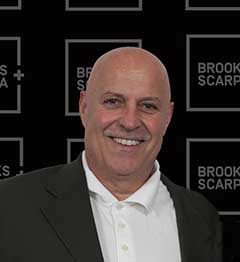 The College of Architecture, Planning & Design, or APDesign, will host Lawrence Scarpa, fellow of the American Institute of Architects and principal at Brooks + Scarpa Architects. Scarpa will present "Ordinary and Extraordinary" at 4:30 p.m. Monday, Oct. 1, in Regnier Hall's Regnier Forum on the K-State Manhattan campus. The lecture is free, open to the public and is sponsored in part by the K-State Student Governing Association's fine arts fee.

Scarpa has garnered international acclaim for the creative use of conventional materials in unique and unexpected ways. He also is considered a pioneer and leader in the field of sustainable design. He is the recipient of the Smithsonian Cooper-Hewitt National Design Museum Award in Architecture and also was awarded the state of California and National American Institute of Architects Architecture Firm Award. Over the last 10 years, Scarpa's firm has received more than 50 major design awards, including 19 National AIA Awards, Record Houses, Record Interiors, the Rudy Bruner Prize, five AIA Committee on the Environment "Top Ten Green Building" Awards and the World Habitat Award, one of 10 firms selected worldwide. He also has received the lifetime achievement awards from Interior Design Magazine and the AIA California Council. (Continue...)

More information about Brooks+Scarpa Architects can be found at https://brooksscarpa.com/. 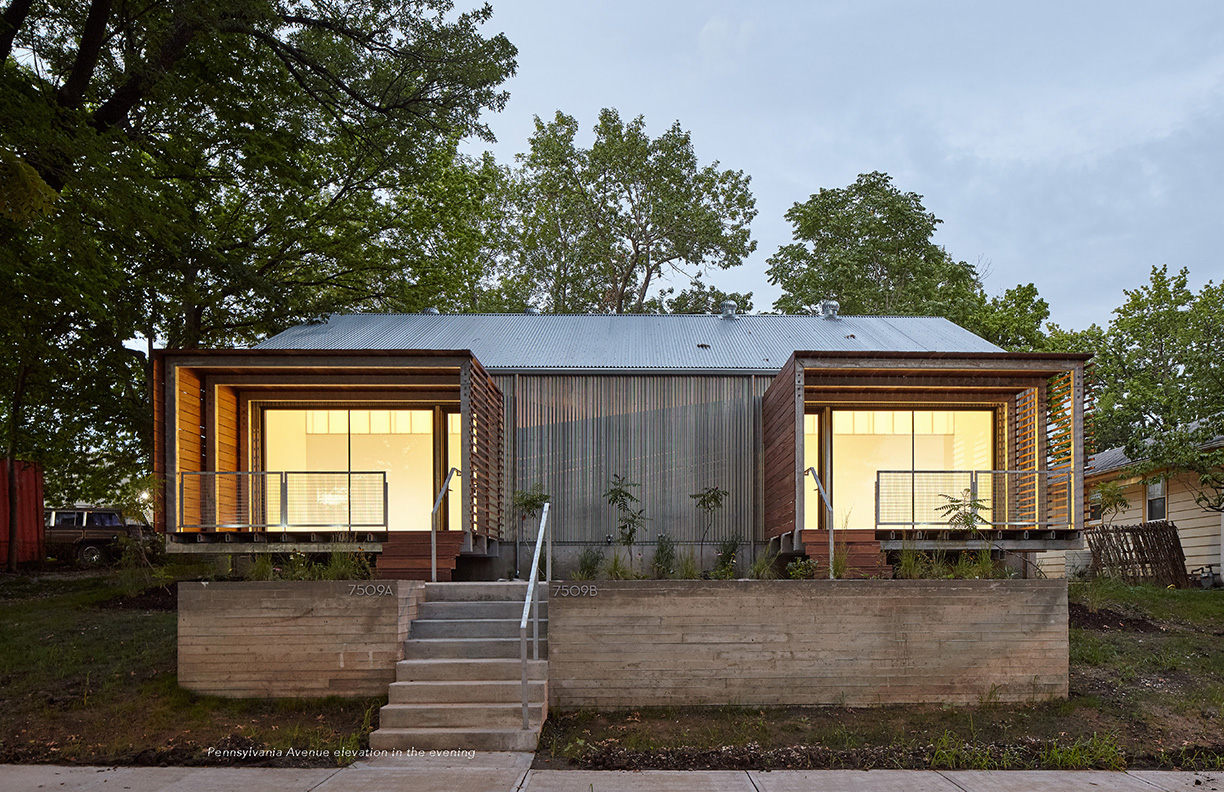 The American Architecture Awards are the nation's highest public awards dedicated to cutting edge design, sustainability, functionality and aesthetics that reflect the character of contemporary architecture. El dorado inc and Kansas State University's Design+Make Studio, as the architects for the project, received the American Architecture Award for its Waldo Duplex project. The award was presented June 20 in New York City. Read the full article here. 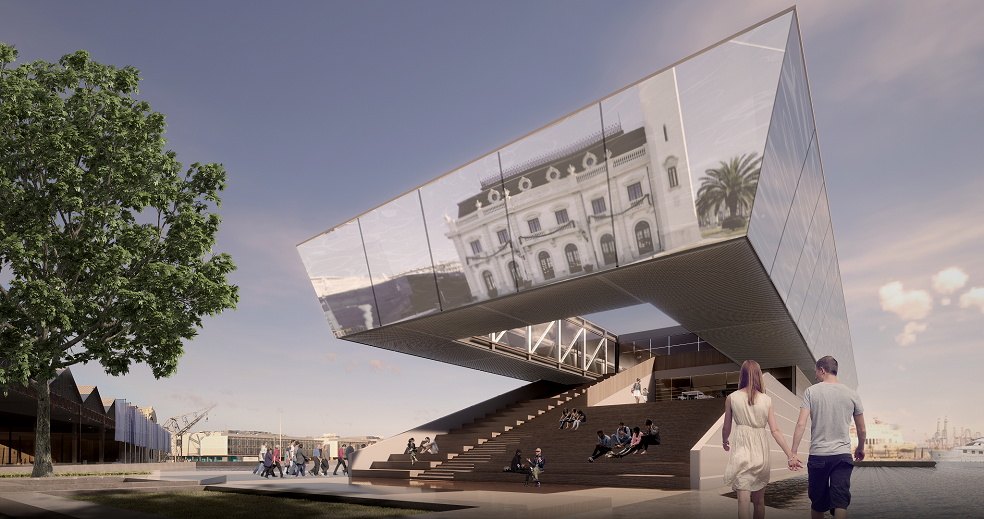 Outstanding design work by fifth-year students in the architecture program at Kansas State University's College of Architecture, Planning & Design, or APDesign, has been recognized with the Heintzelman and Kremer prizes.

The Heintzelman Prize is presented annually for outstanding individual design achievements by students in the final semester of the professional Master of Architecture degree program. The 2018 winner is Christian Berger, Master of Architecture graduate, Wichita, for his project "La Marina Town Square," which was completed in the fifth-year architectural design studio led by Jay Siebenmorgen, visiting assistant professor of architecture. Read More... 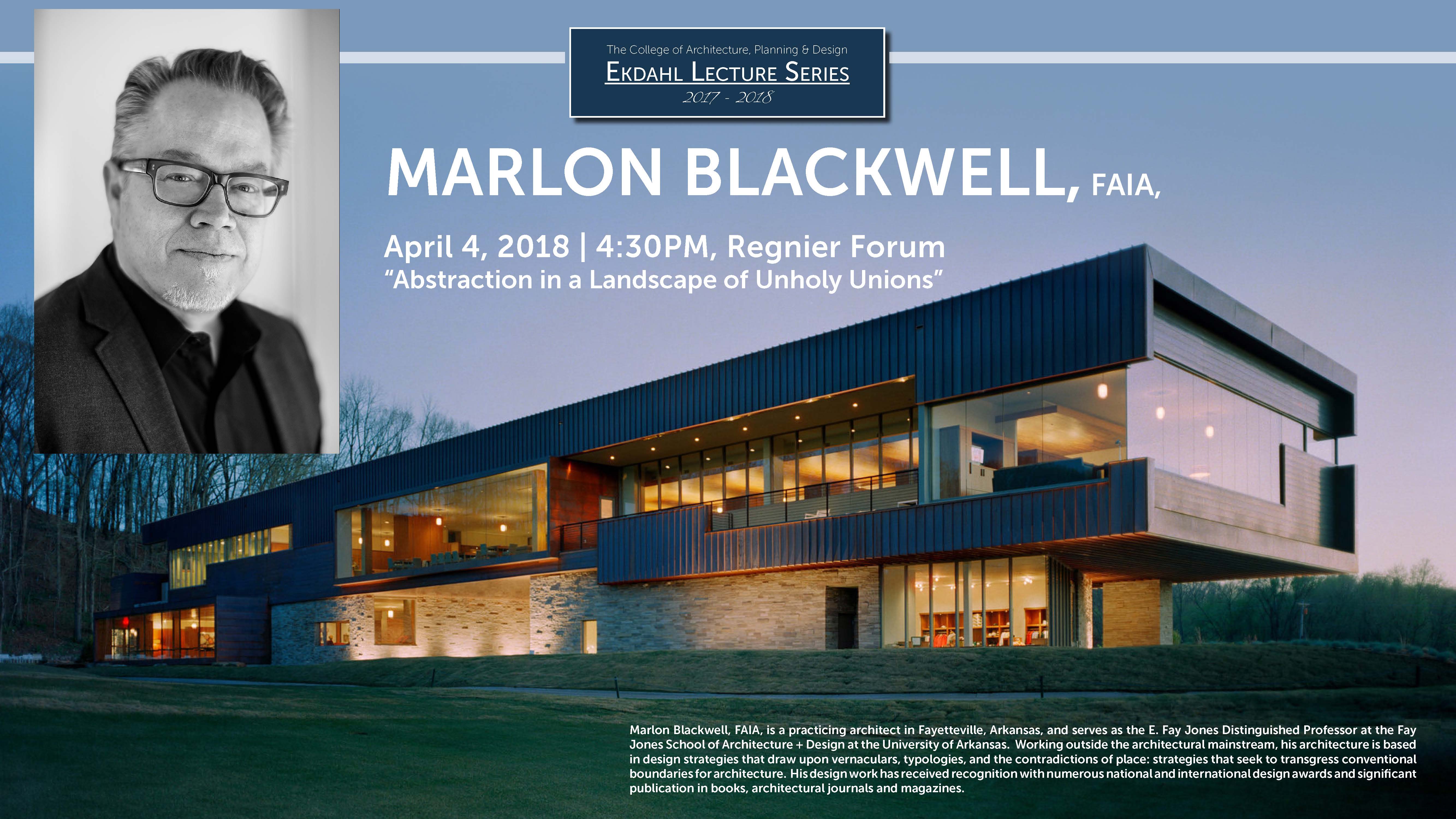 Lecture Title: Abstraction in a Landscape of Unholy Unions

Marlon Blackwell, FAIA, is a practicing architect in Fayetteville, Arkansas, and serves as the E. Fay Jones Distinguished Professor at the Fay Jones School of Architecture + Design at the University of Arkansas.  Working outside the architectural mainstream, his architecture is based in design strategies that draw upon vernaculars, typologies, and the contradictions of place: strategies that seek to transgress conventional boundaries for architecture.  His design work has received recognition with numerous national and international design awards and significant publication in books, architectural journals and magazines.
Lecture featured in the K-State Collegian. 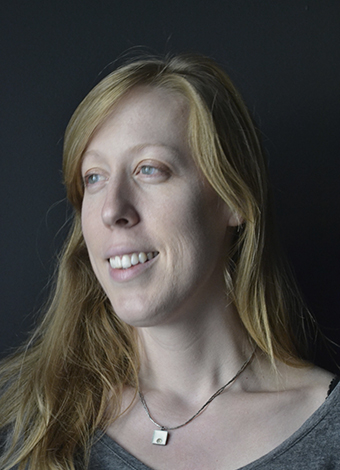 Baudoin teaches Building Construction Systems in Architecture II and Architectural Design Studio, typically at the third-, fourth- and fifth-year levels, as well as graduate seminars. Baudoin's teaching philosophy focuses on encouraging students to develop their big ideas in studio through a grounded understanding in construction systems and a defined relationship to site. She has advised many students who have earned design awards for their work. She also is a professional architect, co-founder of the practice Dual Ecologies, member of the American Institute of Architects, and the author of "Interpreting Site: Studies in Perception, Representation, and Design."
Read the full article here. 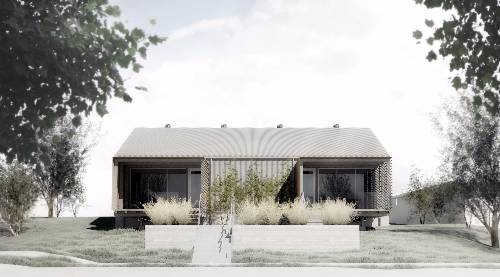 The Waldo Duplex was designed and built by the fifth-year students of the El Doreado-led Kansas State University Design+Make Studio. Located amid the single-family bungalows and shotgun homes of the Waldo neighborhood in Kansas City, Mo., the 1,500-square-feet structure provides two units of affordable housing in a diverse and dynamic setting. “They really studied the typologies of the local community and brought that into their thinking about street life and transitions into a home,” Katherine Chia said. “You can see the research that these students did.” Read the full article...

Kasey Holle, Wamego, a fourth-year architecture student at Kansas State University, is receiving a $5,000 scholarship as the winner of a College of Architecture, Planning & Design, or APDesign, competition sponsored by MANKO Window Systems in Manhattan. (More...)

The College of Architecture, Planning & Design will present a lecture by Fuensanta Nieto, 2018-2019 Victor L. Regnier distinguished visiting chair, at 4:30 p.m. Nov. 3 in Regnier Forum. The lecture "Images/Thoughts" is free and open to the public. 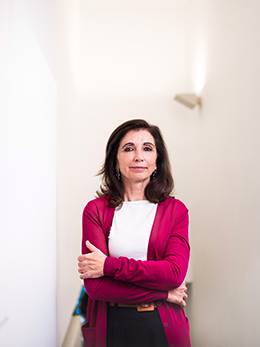 Fuensanta Nieto has worked as an architect since graduating from the Universidad Politécnica de Madrid and the Graduate School of Architecture and Planning at Columbia University in New York in 1983. She is a founding partner of Nieto Sobejano Arquitectos and a professor at the Universidad Europea de Madrid. Fuensanta Nieto lectures on architecture and participates in juries and symposia at various institutions around the world. From 1986 to 1991 she was co-director of the architectural journal ARQUITECTURA, published by the Colegio Oficial de Arquitectos de Madrid. (Continue..)
More information about Nieto Sobejano Arquitectos can be found at www.nietosobejano.com/.

Wenger joined Patkau in 2013 and became a senior design researcher in 2017. He runs the Patkau Design Lab, a facility for design research, prototyping and material investigation. He holds a Master of Architecture degree from the University of Texas, Austin where he served as a teaching assistant, a graduate student representative, and wrote for the student journal, Issue. He received a Bachelor of Fine Arts from the School of the Art Institute of Chicago in 2000 and before studying architecture, enjoyed a career in the Chicago music and arts community. Wenger was the main contributing author of "Patkau Architects, Material Operations," Princeton Architectural Press 2017.