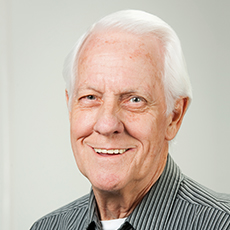 Professor Allan Hastings has been with the IAPD department and the College of Architecture in a number of roles since 1972. He graduated from Kansas State’s Architecture program before continuing his education at the Art Center College of Design where he received a degree in Transportation Design and Product Design. Professor Hastings is an active designer and has been affiliated with the Industrial Designers Society of America (IDSA) as well as the Society of Automotive Engineers (SAE) since 1997.

Prior to returning to Kansas State, Professor Hastings worked in a number of design positions at prestigious companies including Boeing Airplane Co. and General Motors. He eventually opened his own design firm (Care Display, Inc. – later renamed A.J. Hastings Corporation) and ran that for 16 years. During his time practicing design, he acquired a number of patents, making him a go-to person for students with questions.

Professor Hastings specializes his teaching in Product Design and also Transportation Design. In March 2014, his Fall 2014 Transportation Design class was invited to display a booth at the annual Kansas City Auto Show with the designs completed and an interactive workstation. Hastings and his class will be returning for the 2015 Kansas City Auto Show.