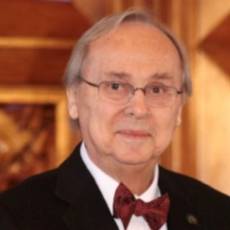 Dr. Peter Magyar, a registered chief-architect in Hungary and in Europe, came to K-State in 2007 as department head (and functioned in that position till 2011). Before, at Florida Atlantic University in Fort Lauderdale, he was the founding director of the School of Architecture. Previously he was also head of the Department of Architecture at The Pennsylvania State University. He has held faculty positions at the Technical University of Budapest, Hungary; Ahmadu Bello University, Zaria, Nigeria; Auburn University (as the Burlington Distinguished Professor); the University of Cincinnati; the University of Monterrey, Mexico; and was a guest professor at the Royal Academy of Arts in Copenhagen, Denmark.

Magyar holds a Doctor of Architecture and Master of Architecture and Urban Design degrees, with distinctions, from the University of Budapest, Hungary. In 2011, he was distinguished with the Pro Architectura Hungarica Medal by the Chamber and Association of Hungarian Architects. He is also a Fellow of the Royal Institute of British Architects (RIBA), since 2017. He designed several international architectural competitions and served as design consultant for numerous built and unbuilt projects. He published 20 books and several scholarly articles in international journals. His area of research entails the cognitive and intuitive aspects of design processes, and applied topology in the analysis, classification and articulation of architectural and urban design. Additionally, to his election to a Fellow in RIBA, in the last few years, his works were acknowledged with several other distinctions. He became member of the Hungarian Academy of Arts and Letters. Had a one man show: Roots of Infinity in the Palace of Arts (Kunst-Halle) in Budapest, and two of his works are shown at the same place in the Second National Salon of Hungarian Architecture (April to August 2019). His works were finalists in the World Architecture Festival in Berlin and Amsterdam, in 2017 and 2018, respectively. Except for Australia, he lectured and conducted workshops on every other continent. Through his thousands of drawings, he investigates the transformation of spirit to matter.