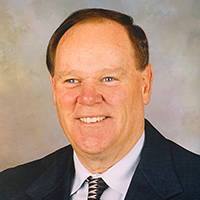 Stephen M. Murphy was the first faculty member hired and co-founder fo the department of Interior Architecture with Jack C. Durgan following Jack's vision in 1968. Steve foiunded the IA workshop for the ddeaprtment and has been succfessfully accredited since 1974 under Professor Murphy's leadership.

Steve was responsible for the overall coordination, teavhing and supervision of the department['s workship area, including repair, purchasing and maintaining the safety stanards and operations for this facility.

The students in steve's classes won 42 national and international design awards including four best of show award winners in the International Woodworking Fair Compeition. The students won the Top Prize Award in the '74, 76', 80', and 84' IWF Competitions. After becoming deaprtment head in 1988, the outstanding furniture design and winning awards continued.

Steve was twice recognized by the National Association of Furniture Manfuacturers (NAFM) and the International Woodworking Fair for outstanding instruction of furniture design in 1976 and 1986. Professor Murphy was also nominated by his students many times an d was a Tau Sigma Delta Archicture Honorary Finalist.

Steve is a member of the President's Club as well as a lifetime member of the K-State Alumni Association. President Jon Wefald and Dean Dennis Law conferred the title of Professor and Department Head Emeritus of Interior Architecture and Product Design.