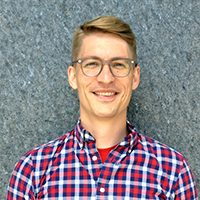 Joseph M. Watson is an Assistant Professor of Architecture at Kansas State University. Whether teaching histories of the built environment or design studios, Joseph encourages students to think of their work as informed by history, attentive to but not bound by the realities of the present, and oriented critically toward the future. History, in Joseph’s understanding, is where designers learn to ask the questions they answer in studio. He challenges students to see design as a tool for reshaping social, cultural, and environmental fabrics, locally and globally, historically and today. Prior to joining K-State, Joseph taught at Louisiana State University, the Rhode Island School of Design, the University of British Columbia, and the University of Pennsylvania.

Joseph’s research examines architecture as a register of social, economic, and environmental change. His work focuses primarily on the early 20th century United States. He treats the spatial, structural, and organizational qualities of building types like office towers and suburban homes as evidence of architecture’s efforts to manage the emergence of petrocapitalism and the spatial effects of structural racism, among other phenomena. Joseph’s work has appeared in publications such as the Avery Review, Journal of Architectural Education, and Journal of Urban History. His research has been supported by grants and fellowships from the Briscoe Center for American History at the University of Texas at Austin, Harvard University Graduate School of Design, and University of Pennsylvania’s Mellon Foundation Humanities, Urbanism and Design Project.

Joseph received a Ph.D. in the History and Theory of Architecture from the University of Pennsylvania, an M.A. in Social Ethics from Union Theological Seminary in the City of New York, and a B.Arch from the University of Tennessee, Knoxville. He has worked as an architect in Knoxville and New York. He is a 2020–21 Tyson Scholar of American Art at the Crystal Bridges Museum of American Art.