Poetics of the Konza Prairie, Year One 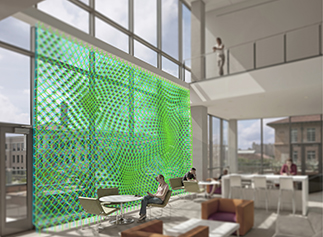 The scholarly conference provides a diverse series of speakers and presentation topics addressing the wide array of issues faced by design educators. Topics included classroom flipping methodologies to late 19th-century beaux arts state capitol building design. It also provides a venue for junior faculty and seasoned educators to interact and share knowledge and advice. And it encourages graduate students to gain a sense of educational trends and learn about the latest teaching tools for inside and outside the classroom.

Ordia, with co-creators Igor Siddiqui and Tamie Glass, both of the University of Texas, Austin, presented "Mas Moss: A Living Curtain"and the initial abstract as well as the presentation were judged. Their work won the 2014 IDEC Creative Scholarship Award for Best in Category: Design as Idea.

"This creative scholarship is an excellent example of the fruitful nature of collaboration of seemingly dissimilar fields such as plant science and design, and illustrates that technical solutions can also be beautiful solutions," said Katherine Ankerson, professor and head of the department of interior architecture & product design. "I am pleased that the judges recognized the quality of the investigation and design in this project with the high award."

Ordia said the inspiration for the project came from her master's thesis and credits the collaboration with her University of Texas colleagues for its success.

The project was a finalist in the Center for American Art and Design CURTAINS competition, in the top 20 of 160 submissions. "The only criteria for the design of the project was that it had to be a curtain. It could be any size or material and ideally installed at the University of Texas," she said.

Although a full-scale model hasn't been made yet, there are small prototypes. The living portion of the curtain is created out of a native plant species that grows naturally, without soil and little water, on trees and other host material from the Southern U.S. to parts of South America. It is being introduced to the interior environment for the potential of the plant material to filter the air and improve indoor air.

Through her research on this project, Ordia hopes to teach her students about the importance of interdisciplinary research and looking beyond the traditional boundaries of interior design for inspiration and innovation. She plans to teach a class in 2016 about sustainable design. 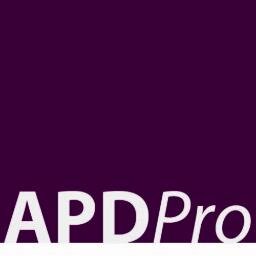 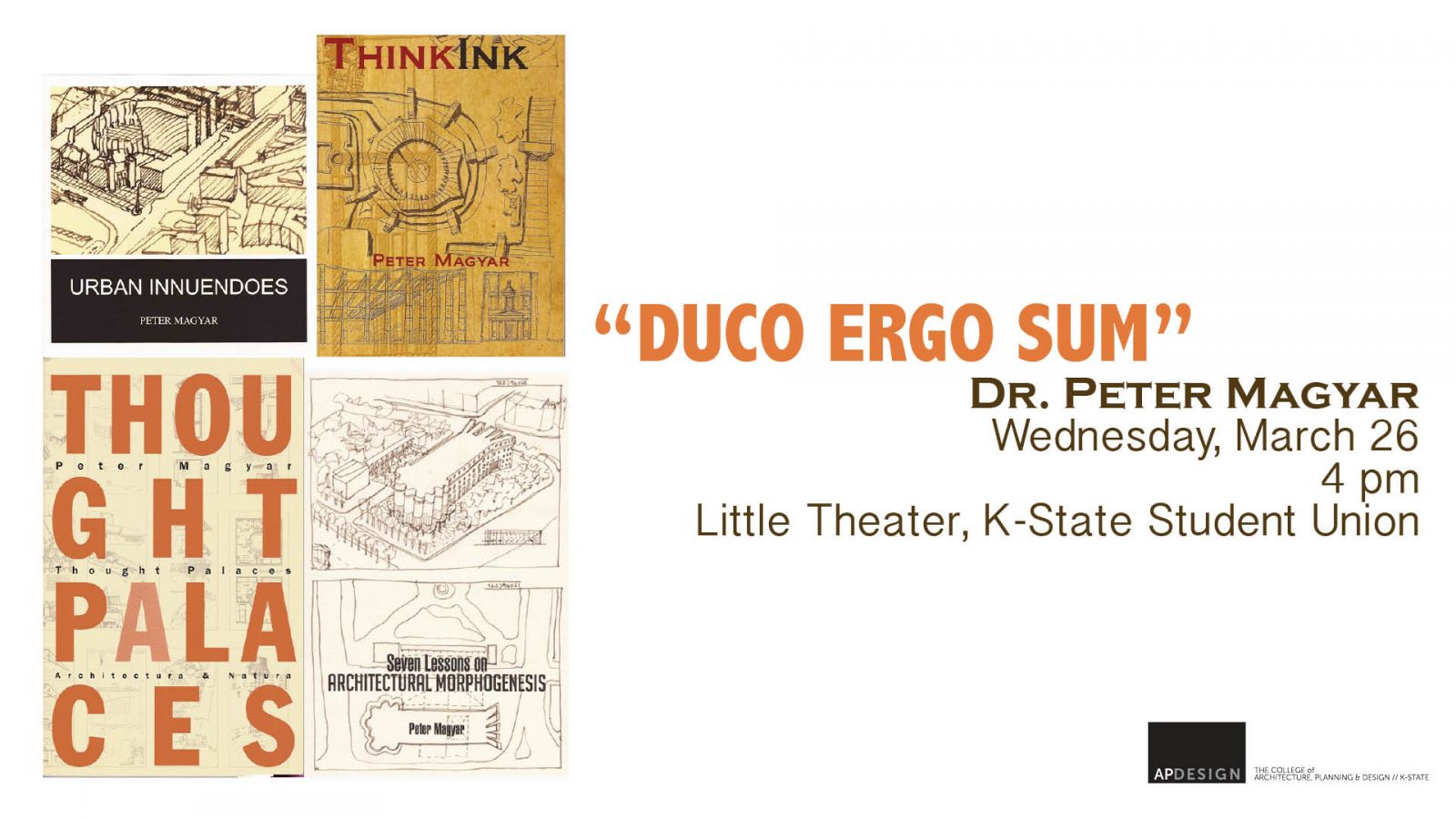 FRIDAY, MARCH 28, 2014 6:30p.m
Nelson-Atkins Museum of Art, 4525 Oak Street, Kansas City, MO 64111
The Kansas City Design Center will host the 2013-2014 Victor L. Regnier Distinguished Visiting Chair Javier Sanchez' lecture.
Javier Sanchez is an international renowned architect and developer based in Mexico City. He is the founding partner and lead designer of the architectural workshop of JSª. Javier Sanchez graduated as an architect with honors from the Universidad Nacional Autonoma de México (UNAM), Mexico and received his Masters degree in Sciences and Real Estate Development from Columbia University in New York.

On Wednesday April 2, the College of Architecture, Planning & Design at Kansas State University will welcome Sally Augustin an environmental psychologist specializing in person-centered design, as she presents her lecture Designing for Emotion in the K-State Forum Hall at 4:00 p.m., this event is free to attend and open to the public.

Sally Augustin, PhD, is a principal at Design With Science. She integrates insights from environmental/design psychology, other social/physical sciences, and project specific research to develop places, objects, and services that support desired experiences. Her clients include manufacturers, service providers, and design firms in North America, Europe, and Asia.
Design influences mood in foreseeable ways and mood matters.  Mood has been linked to ways of thinking and immune system function, as well as how well we get along with others, for example.  Good moods have repercussions valued by our society, such as innovative thinking.  The developing positive design movement is concerned about the emotional repercussions of design and focuses on creating environments in which people flourish and have constructive emotional experiences.  Environmental psychology research supports positive design by identifying the emotional implications of designed and natural experiences.

This session will focus on how sensory and psychosocial experiences of the physical world can be harnessed to influence emotional state and support positive design—design that enhances human well-being.

Daryl S. Rantis, who graduated with a BArch from Kansas State in 1985, passed away on March 15, 2014 from heart complications while bicycling near his home in Portland, Oregon. At the time of his death, Daryl was working as an independent architect after serving for two years as Design Director at Green Hammer Design-Build.

Throughout his twenty-six year career as an architect Daryl was dedicated to creating buildings and communities that preserve the earth and lift the human spirit. His commitment to these values was evident in his thesis project, done with Stanley Koehn, for the Farmstead at the Meadowcreek Project in Fox, Arkansas, an experiment in environmental education founded by noted educator and author David Orr. Upon graduation Daryl and Stanley were hired to actually build their locally-sourced, passively heated and cooled dwelling design. Daryl’s life-long interest in the craft of building was nourished by this formative experience. 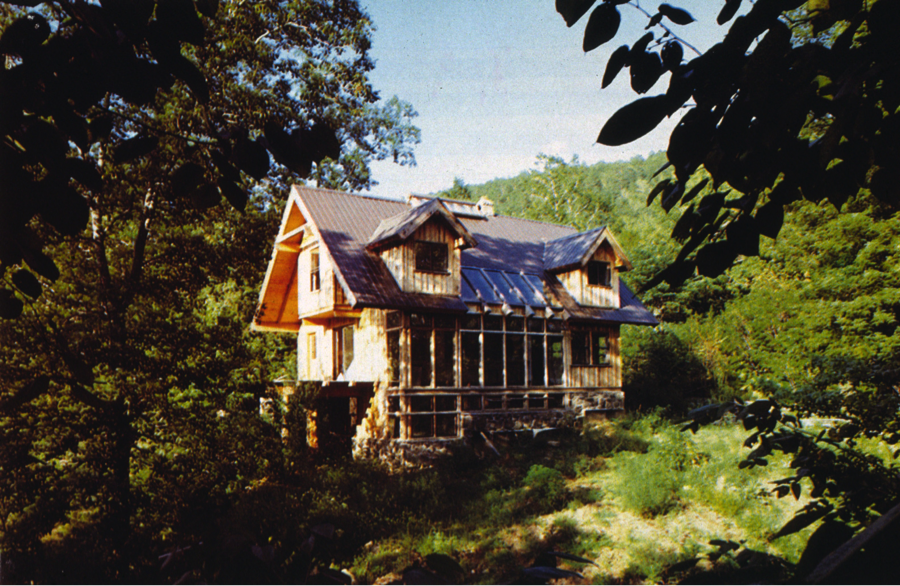 The Sustainable Farmstead at the Meadowcreek Project

Daryl began his professional career at Murphy Jahn Architects in Chicago and later worked for he late AIA Gold Medal winner, E. Fay Jones in Fayetteville, Arkansas. It was this apprenticeship with Jones that Daryl was able to realize his goal of combining sustainable and life-enhancing design with the distinctively American tradition of organic architecture evident in the work of Frank Lloyd Wright, Greene and Greene and E. Fay Jones. 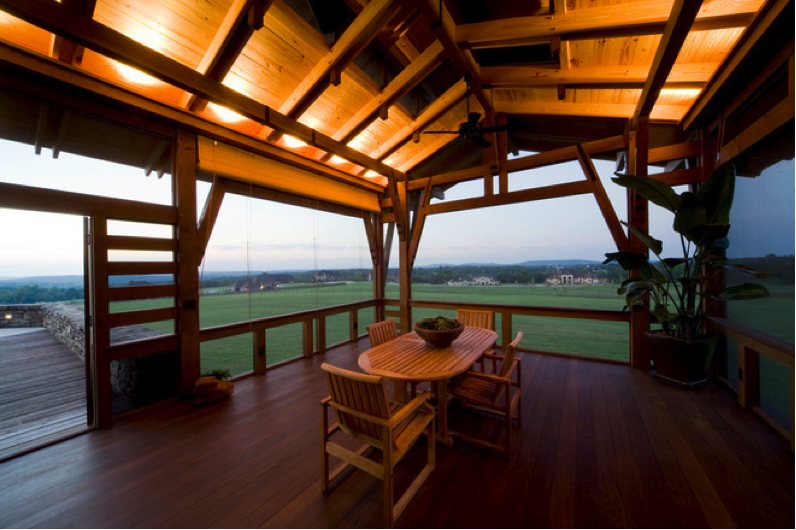 Porch Addition for the Robertson House

Daryl’s work as an architect encompassed everything from small porch additions to custom designed houses and modest “right-sized” dwellings. In addition, he worked for progressive developers to design place-based and sustainable rural communities inspired by the principles of New Urbanism.

His buildings were published in a number of journals including Fine Homebuilding, Progressive Architecture and OZ Magazine. In 2013 he published a book, Smaller, Simpler, Smarter: Homes and Plans by Daryl S. Rantis, Architect (available through Amazon) that provides a comprehensive summary of his work as an architect and community designer.

With the passing of Daryl Rantis the K-State community has lost one of its brightest lights and the nation has lost an architect who demonstrated that beauty and sustainability can and must go together if we are to create a society worth sustaining. 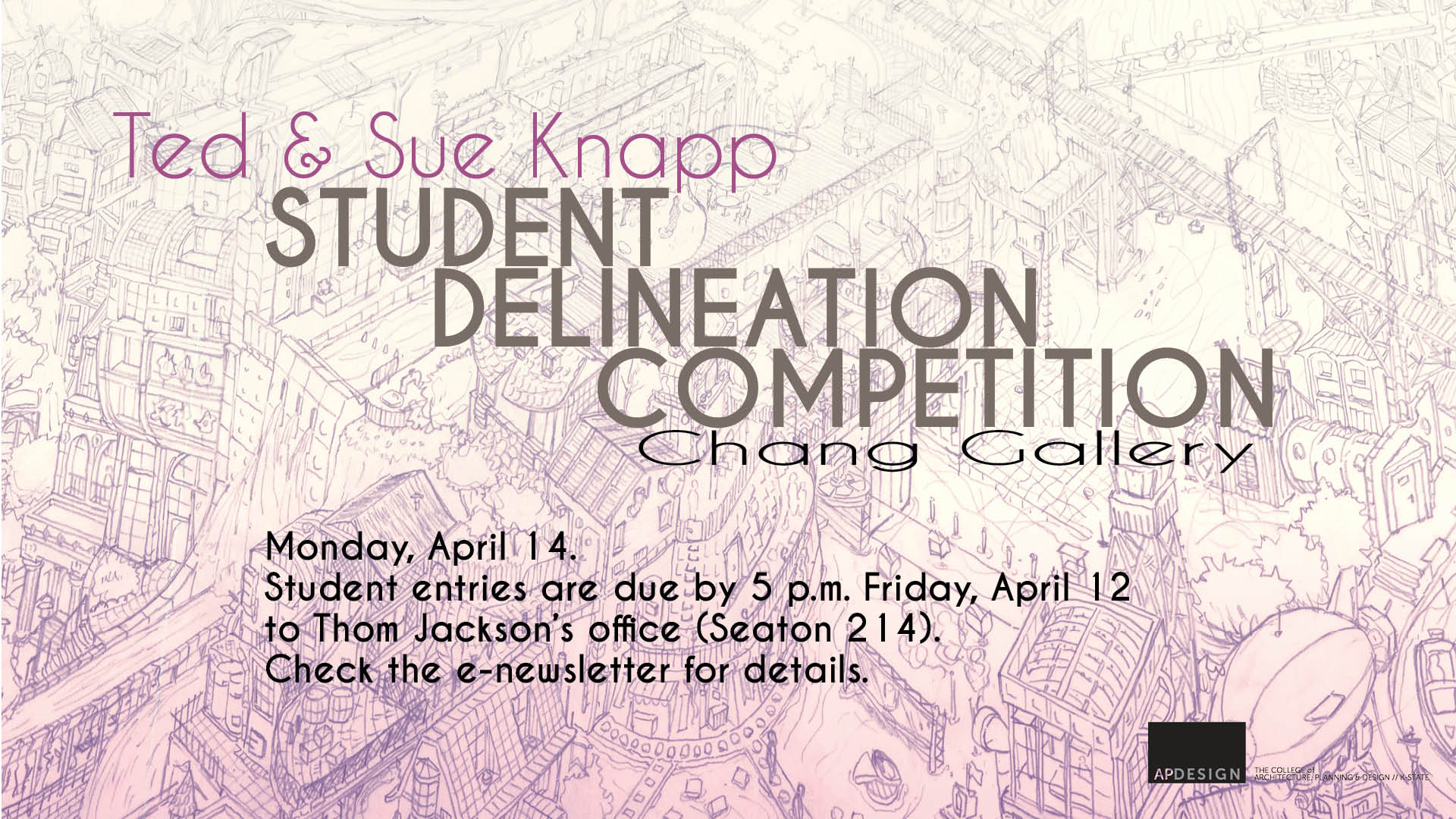 The Ted and Sue Knapp Student Delineation Competition will be hung in the Chang Gallery on Monday, April 14.

Student entries are due by 5 p.m. Friday, April 12 to Thom Jackson’s office (Seaton 214). Entries must be in one of four categories: freehand black & white, freehand color, computer or mixed media. All entries must include a hanging device (NOT tape), a CD or an email to tjackson@k-state.edu containing a digital scan/copy of the entry must accompany the form. This year’ first place prize is $2,000 so let the competition begin! CLICK HERE TO DOWNLOAD THE ENTRY FORM