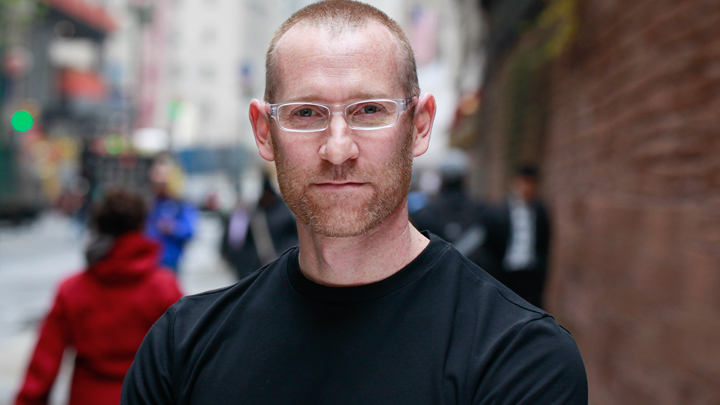 The lecture will be at 4 p.m. Thursday, Jan. 30, in the K-State Student Union's Little Theatre. This event is free and the public is welcome.

Siebenmorgen's lecture, "Culture Climates," will focus on four projects as he reviews the influence of culture on conceptual thinking toward a poetic resolution in architecture. He will discuss the lineage of ideas that influence his work.

Siebenmorgen works at NBBJ's New York office. As a design principal, he maintains the design direction of all projects that emerge from the office. He interacts with every project team within the studio, ensuring a consistent approach and design quality. Siebenmorgen says he enjoys experimental design within a client-driven context: both by developing building systems that blend sustainability with form and image-making, and by investigating programmatic strategies and relationships that increase value.

MANHATTAN -- A Kansas State University architecture professor has been recognized for his work with students to revitalize downtown Kansas City, Mo.

Vladimir Krstic, a professor in the College of Architecture, Planning & Design who serves as director of the Kansas City Design Center, or KCDC, has received the Urban Hero award from the Downtown Council of Kansas City. The council is a nonprofit membership organization committed to the revitalization and resurgence of Kansas City's downtown. Its Urban Hero award recognizes small businesses and individuals who are passionate about making downtown a more vibrant place to live, work and play.

As director of the Kansas City Design Center, Krstic focuses student research and design efforts in coordination with civic organizations, leaders and design professionals on helping realize the design future of Kansas City. The center has been recognized nationally and regionally for its projects and publications.

"This recognition of Vladimir's leadership is testament to his passion for design, his qualities as a teacher and mentor, and his overall belief in the potency of visioning the future of Kansas City," said Tim de Noble, dean of Kansas State University's College of Architecture, Planning & Design. "I'm am so pleased to see Vladimir, and by extension, his students, recognized for all the qualities that have long made him one of our finest faculty members."

As center director, Krstic engages university faculty and some of the region's most talented architecture and planning students in a learning laboratory that actively explores alternatives for Kansas City's future development. The center also serves as an independent forum for critical dialogues about architecture and planning issues, offers technical assistance to public agencies and local community organizations, and promotes excellence in the design of Kansas City's built environment. The center's educational programs are built around its resident urban design studio, through which faculty and students form partnerships with local client groups to develop design concepts and implementation proposals addressing major architectural, urban design and urban planning issues throughout metropolitan Kansas City.

"Though the award may be in my name, it is a testament to the talent, ability and perseverance of the KCDC students I taught. Without them, the success of the program and its contribution to the improvement of urban environment in Kansas City would not have been possible," Krstic said.

Krstic has taught at the center since 2009. He was named interim director in 2011 and was named director in July 2012. Since joining the center, Krstic has led several student award-winning projects, including the "Independence Avenue Urban Vision Study" that won an Honor Award from the Kansas City chapter of the American Institute of Architects in fall 2013.

More information on the Downtown Council of Kansas City's Urban Hero awards is available at http://www.downtownkc.org/about/get-involved/downtown-kc-awards/urban-heroes.

A faculty member of Kansas State University's College of Architecture, Planning & Design, or APDesign, since 1988, Krstic was promoted to full professor in 2002. He earned an Engineer of Architecture degree from the University of Sarajevo in Bosnia -- formerly Yugoslavia -- and a Master of Engineering in architecture from Kyoto University in Japan.

Please note the following dates, times and titles for the 2014 PhD Spring Colloquia.

NOTICE OF INTENT TO NOMINATE, BY LETTER OR E-MAIL to lisash@ksu.edu, IS DUE FRIDAY, 31 JANUARY 2014.

THE COMPLETE NOMINATION PACKAGE IS DUE FRIDAY, 14 FEBRUARY 2014 NO LATER THAN 5:00 PM IN THE OFFICE OF THE DEAN IN 115 SEATON HALL.

The Academic & Curricular Affairs Committee (ACAC) will determine eligibility as applied to the Nomination Policy and Procedures outlined below.

Members of the Academic & Curricular Affairs Committee welcome more than one nomination per department, as well as interdepartmental nominations. If students desire assistance with their nominations, please contact Lisa Shubert or one of the ACAC members. Self-nominations will not be accepted.

The NOMINATION PACKAGE must be delivered to the Office of the Dean in the College of Architecture, Planning & Design by 5:00 pm on FRIDAY, 14 FEBRUARY 2014.

NOTE: A current member of the Academic & Curricular Affairs Committee will serve the committee as a convener and advisor.  S/he will be a non-voting member.  In the event a full contingent of the committee as described above cannot meet together, the chair of the Academic & Curricular Affairs Committee will determine the best possible procedure to continue the review of nominated candidates and voting for the award.

The students in the K-State Planning in Pop Culture class have produced a two-hour radio special for broadcast and streaming on KSDB-FM. The two-hour special will be on KSDB-FM at 10 a.m. Saturday, Feb. 1.

Fourteen students, under the direction of Huston Gibson, Katherine Nesse and LaBarbara Wigfall, in cooperation with Jennifer Edgar, Eric Nehm and Jared Clark of the KSDB-FM production department, produced the program. Students nominate songs, suggest movies and stories and talk about their own experiences to enrich and diversify the discussion. The objective of the course is to encourage students to think creatively about how our natural, social and built environment affects us as individuals and as a society.

In addition to being broadcast over the air on 91.9 MHz, the program can be heard on K-State Campus Cable channel 25, streamed on thewildcat919.com and is available on mobile apps for Android and Apple.

Last June marked the first Planning in Pop Culture Radio Special broadcast on KSDB-FM, the Wildcat 91.9. The first broadcast won the New Horizon Award from the Kansas chapter of the American Planning Association

The primary purpose of the International Incentive Grant program is to promote the internationalization of Kansas State University. Proposals should fall into one or more of the following broad categories:

Due to the breadth of programming that this International Incentive Grant program encompasses, we encourage all Kansas State University faculty members to consider submitting a proposal. Individual and joint grant proposals will be considered. Award Application deadline is February ­­­­­­­­­­­­­7, 2014 at 5:00 p. m. Awardees will be notified no later than February 20, 2013.

"The Opposite of White Space"