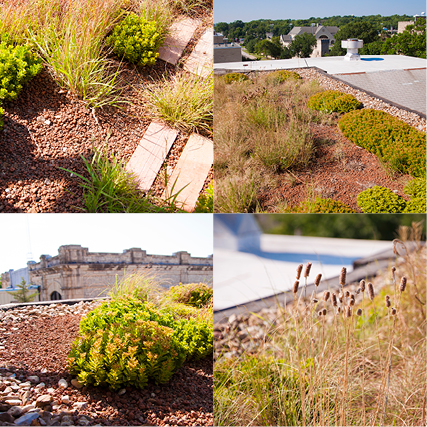 In May 2009 Lee Skabelund and Todd Gabbard worked with faculty and students from several disciplines to install the first green roof on top of Seaton Hall. Professor Skabelund’s motive was research, the study of green roof vegetation and specifically native plant material, to consider the interrelationships between vegetation, soil depths, soil temperatures, soil moisture, and climate. Additionally, the project shows how stormwater can be slowed in a living green roof. Major studies have shown green roofs to be effective in increasing the waterproofing membrane lifespan almost twofold, and significantly lowering utility costs by dispersing a large percentage of the heat on the roof. The key to reducing urban heat loads, as revealed by monitoring this upper green roof since 2009, is to create and maintain well-established plant cover on the roof.

Prior to installing the green roof careful planning was required to retro-fit the existing rooftop. One of the initial components to consider was the strength of the existing roof. A structural analysis was performed by a licensed engineer to determine the amount of weight the roof could accommodate since the weight of all new materials on a rooftop must not exceed the designed structural capacity of the roof.

After seeing success with the first living roof project, a lower green roof was installed in May of 2012. This design-build project was led by Professor Skabelund, working closely with Todd Gabbard, landscape architect Dede Brokesh, and a number of architecture and landscape architecture students. This second green roof showcases a different plant palette and installation method than the upper green roof (primarily using green roof trays). The lower green roof is being monitored with rain gauges along with surface temperature and relative humidity sensors. It is watered as needed to establish the plants and provide supplemental water during dry periods. Design and implementation of a rainwater harvesting system is planned for Spring 2014.

Since 2009 the upper green roof has been exposed to varying yearly watering schedules, as the researchers explore the differences between natural rainfall and supplemental hand-watering. In 2011, the upper green roof was provided supplemental water on only the east side of the green roof. Since 2013, researchers have continued to observe plant survival and growth—with no supplemental water provided via irrigation. One of the major goals of the two green roof projects is to showcase an effective method of slowing stormwater runoff. Well-designed green roofs can reduce downstream flooding, urban stormwater pollutants, and urban heat loads. Living roofs can also increase visual interest/beauty and biological functioning/diversity in urban settings. 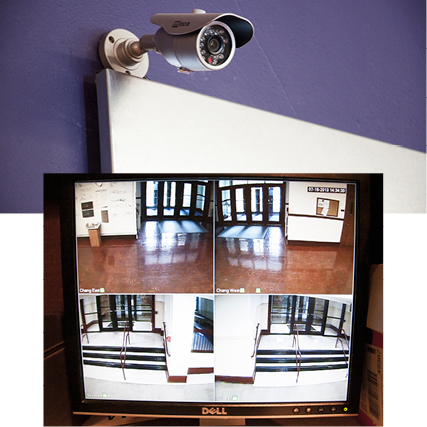 SECURITY
Safety is a major priority for the college of Architecture, Planning & Design. The main doors to Seaton Hall are open all hours of the day to allow students access to studios and the technology resources they need for coursework, and in recent years faculty found a “locked door” policy wouldn’t solve the problem. “Because we allow students 24 hour access to the labs, for added security we’ve decided to move forward and make sure they’re protected” said Don Crawford Information Systems Manager for APDesign.

As a result of a recent loss of valuable computer equipment, the IT department has begun installing a more robust system to protect students and resources within the college.

Don Crawford has taken the lead on updating the buildings security, making the recommendation for closed circuit security cameras, and overseeing their installation. The first major set of improvements made to the building was installed during the 12-13 winter intersession, with much more planned for the near future.

To learn more about the upcoming changes in technology, please contact our resident computer geek Don Crawford at Crawford@k-state.edu

SCAVENGER HUNT (*FOUND! Thanks for playing and watch for the next clue in the 7-29-13 E-Newsletter!)
Those of us involved with the office of communication and event planning would like to introduce you to a new game we’ll be playing each week. Hidden somewhere on the premises of Seaton Hall (including outside) is a laminated note. When you find the laminated note, you can bring it to Seaton 214 to claim your prize. Each week inside the E-Newsletter (the thing you’re reading right now) there is a picture that doesn’t necessarily belong with the story it’s attached to.

This picture will be something that stands out in Seaton hall, and will direct you into the area of the card.
Now, before you get to thinking this is going to be easy, I said SOMEWHERE in the E-Newsletter. More information can be found on Facebook, but will not be posted until after the E-Newsletter has hit your inbox (giving the newsletter readers an advantage, hint hint) 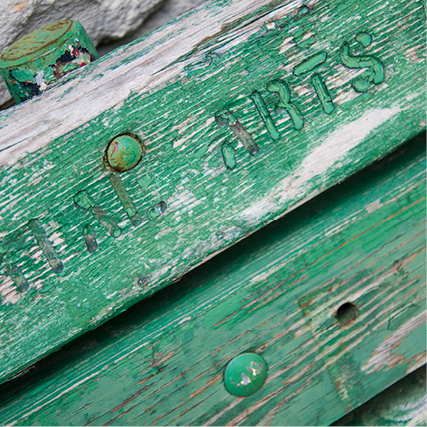 Nineteen Kansas State University graduate students will be exhibiting and discussing their proposals for resilient urbanism in eastern KCMO, including the Truman Sports Complex, the Blue River corridor, and nearby neighborhoods. The students will formally present their ideas to a group of local design and planning professionals, followed by a reception open to the public beginning at 5PM.

The student research covers a variety of topics, including regional transit, smart growth strategies, neighborhood revitalization, and ecological restoration. The work includes a comprehensive framework and five design visions building on the Mid-America Regional Council’s Creating Sustainable Places Initiative. This project is part of a three year working relationship between the Mid-America Regional Council and the College of Architecture, Planning & Design. Participants in this project are graduate students studying with Associate Professor Blake Belanger and Assistant Professor Howard Hahn.

The public is invited to the reception from 5:00 to 7:00 PM to view the proposals and talk with graduate students, professors, and members of the KCMO planning and design community. KCDC is located at 1018 Baltimore Ave in Downtown KCMO. Light food and drinks will be provided.

The studio was generously supported by Bridging the Gap through Creating Sustainable Places grant funding. Bridging the Gap is a non-profit advocacy organization working to make the region more sustainable by connecting environment, economy, and community.