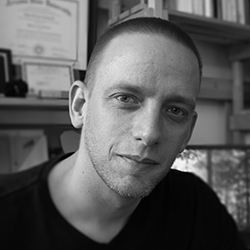 Associate Professor Chad Schwartz joined the faculty in the Department of Architecture at Kansas State University in the Fall of 2017 after serving for six years as a professor at Southern Illinois University and eight years as a faculty associate at Arizona State University. Professor Schwartz has taught extensively in the design studio, both graduate and undergraduate, and in the building technology and structures sequence. He has also, through his construction courses, engaged his students in service learning and design/build endeavors in the community.

Professor Schwartz received his M.Arch degree in 2003 from Arizona State University and a Bachelor of Arts degree in Architecture from the University of Illinois-Chicago in 2000. He is an NCARB certified and licensed architect in Arizona, where he worked professionally for almost a decade prior to shifting to a full-time academic career.

At the end of 2016, Professor Schwartz’s first book, Introducing Architectural Tectonics: Exploring the Intersection of Design and Construction, was released by Routledge. His second book, Situate, Manipulate, Fabricate: An Anthology of the Influences on Architectural Design and Production, was published in the fall of 2020. His current research builds on this line of thought, exploring the role of architectural tectonics in the development of both contemporary and historic architecture as well as strategies for translating the theory of tectonics into practical and poetic activities in the university classroom.